Three research teams are united to investigate the role of osteocytes

Not only it is a potentially terminal disease, cancer exposes the affected individuals to a long and challenging physical and psychological recovery. When cancer invades the bone, the chance of a favorable prognosis drastically decreases and so does the patients’ quality of life. As part of µBone Consortium we, three research teams from Dresden (Martina Rauner), Hamburg (Björn Busse) and Berlin (Kay Raum and Regina Puts), have united to investigate the role of osteocytes, which are the most prevalent bone cell type, in spreading of cancer metastases. Understanding of the dialog between osteocytes and cancer cells may promote the identification of new cancer drug targets. Using state-of-the-art imaging techniques (Busse and Raum), we are in the process of analyzing metastases-induced pathological changes in bone structure and its osteocyte cellular network, first in genetically-altered mouse models with a compromised bone metabolism (Rauner) and soon in bone biopsies of cancer-affected individuals (Busse). Based on the previously established fact that shear force exerted on osteocytes inhibits cancer invasion, the team at Charité (Raum and Puts) also investigates if mechanical stress induced by low-intensity pulsed ultrasound stimulation, a non-invasive technology currently used to improve bone regeneration, can boost up the natural self-defense mechanisms of osteocytes against cancer metastases. 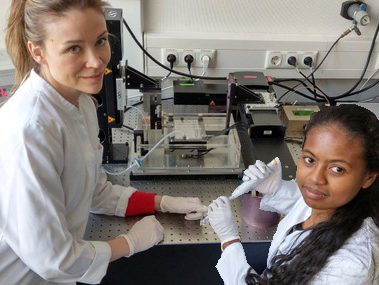 Lorenz Hofbauer, M.D., is this year’s recipient of the Lawrence G. Raisz Award!

Who AM I and what will I DO to fight cancer?